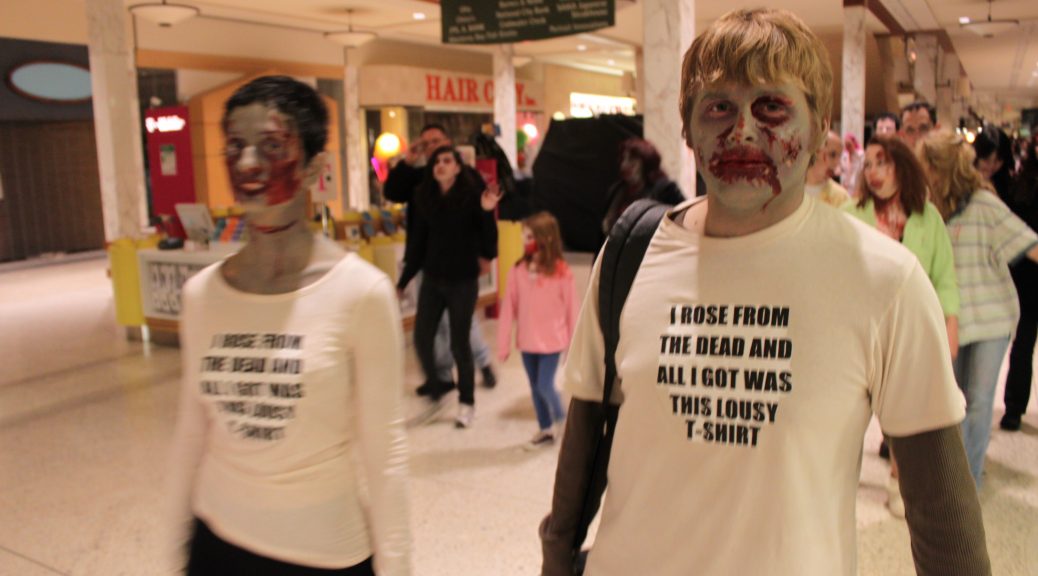 Oh crap. This news story is from my neck of the woods….

When there’s no room in hell, the dead will walk downtown

If you can’t find me, it’s because I’m hiding somewhere with a baseball bat. (What little brains I have, I’m keeping!!)

I’m personally not really into the Horror genre, but somehow I keep posting about zombies. This evening I stumbled across a fun/interesting question: Will Your Local Police Warn You When Zombies Attack?

The answer seems to depend on where you live.

And once the attack is over, be sure to properly dispose of the zombies.

The Metro Clothing Company store in Seattle hosted a “Zombie Crawl” on Friday with folks show up at the store dressed as Zombies. There was a contest involved with the three best costumes winning passes to this weekend’s Crypticon.

Evidently the guy who won first place was a little too authentic. Someone who didn’t know what was going on called 911 and the police arrested the zombie. (They released him once the misunderstanding became clear.)

(A tip of the hat to Jim Romensko for noticing this story.)

Earlier this evening I received information about a new horror con called the “Zombie Fest.” Horror’s not my personal genre of choice (though I certainly won’t dispute its popularity), but this one caught my attention a bit more than usual.

That’s an unusual location for a convention, though it’s certainly appropriate in this case. Back in the winter of 1976, George Romero filmed Dawn of the Dead there. (The plot summary on IMDB refers to the mall as “secluded.” It didn’t seem that way to me growing up, and much so less now the area has been even more built up.)

Off the top of my head, I’m not aware of any other conventions taking place in shopping malls. I just wish the ice rink was still there.